I’ve had a few people comment on the re-launch TEL Handbook image and, as a consequence of this, thought it might be useful to post an overview of how the image came to be.

As a unit we have spent a great deal of time developing and curating an extensive suite of resources and information into an online ‘handbook’ and, with a recent round of amends and additions completed, we wanted to draw attention to the new iteration of the material with a relaunch.

To do this we employed a range of strategies including Tweeting, internal communication channels and blog posts but, in order to reach outside of the online environment and to also illustrate our online communications, we wanted to create a (hopefully) reasonably striking image to draw further attention to the online resources.

If you look around campus or observe the various University communications conduits you will broadly find that there is a preponderance of text heavy communication; flyers or posters that, whilst informative, don’t generally pique one’s curiosity.  This predicated the notion of creating a poster, and associated image, that adopted a more ‘event’ based feel.  In essence presenting only a minimal amount of pertinent information along with a strong visual motif.

When coming up with concepts I tend to mentally conceive of ideas that may work and then sketch them on paper.  I generally find sketching, however rough those sketches might be, helps refine initial thoughts into something that can be developed further.

I mention this here as, whether you feel you can sketch or not, the actual process of developing your image will be very much easier (and much less time consuming) if you have at least a half-formed idea of what you want the finished work to look like.  This is especially the case if it involves photographs.  If sketching isn’t your forte, then you could describe your idea textually.  If you’ve seen something similar then bookmark it, download it or scan it for personal reference purposes.

I came up with four or five initial ideas and then whittled them down to the two I thought had the most potential.  The ‘book made of iPads’ idea and a concept where I had the campus sitting on an iPad (like a holographic display); both of which I intended to execute by photographic manipulation.  After a quick scout (and a check online) it turned out that, without access to a drone or a budget, I wasn’t going to be able to source a suitable photograph of the campus so I went with the ‘iPad book’ idea.

Once I knew I was going to develop the ‘iPad Book’ concept the first thing to do was take the photographs I would need to assemble the ‘book’ and to take them at the highest resolution possible with the equipment available to me.

As you can see from the raw photographs (the embedded ones here aren’t hi res and cropped to show just the iPad) I tried to take the three needed angles under the same lighting conditions as each other and with the iPad in the position that would be needed to create the finished ‘book’.

It’s worth noting here that I took the photographs with quite a tight depth of field (using a 35mm Prime Lens); this actually made it harder later on due to parts of the iPads not being in full focus.  If you are taking pictures with a mobile phone or with a more ‘snap’ orientated camera you are less likely to have this issue.  I did however want the tight focus to create a greater sense of scale and reality to the finished image.

Always work at the highest resolution you can, especially if you intend to go to print.

Once I had source photographs the next thing to do was remove the background in order to leave just the iPad visible.  Though I usually do this non-destructively using a layer mask in Photoshop I’ll explain further using the free online PIXLR editor to illustrate the process .

Though you can apply masks to layers in free-to-use tools such as PIXLR, if you are using PIXLR I would suggest simply erasing the background information as PIXLR’s layer masks aren’t as well featured as that of a commercial application like Photoshop.

In PIXLR, to erase the background, you first need to unlock the default background layer on your layer palette.  This will cause it to automatically rename to ‘Layer 0’.

You can then simply paint out the background information you don’t want using the Eraser tool.  You may want to adjust both the eraser ‘brush’ size, and possibly its hardness, to achieve the results you need.  I tend to use a large, hard edged brush to quickly get rid of larger areas and then a smaller and softer brush to handle tightening edges (fully hard edges often don’t look completely natural).  Brush parameters can be set with sliders at the bottom of the brush palette.

You can then use the Wand tool to select that colour (with one click) and delete it.

If there is decent contrast between your background and your foreground object you may get good results from using PIXLR’s Wand tool to directly select the background for easy deletion.  If I’d spent more time setting up the photographs to have the iPad seated on a nondescript consistent background I could have done this.  If you don’t have a relatively flat background you will generally need to go through a process of trial and error with the Tolerance setting on the Wand tool (the parameters for tools are displayed directly under the drop-down menus at the top of the canvas area) to get the best results.

Its worth knowing that holding the Shift key down will allow you to add to your selection set when using the Wand (meaning you can click multiple times to expand your selection).

Again, first unlock your background layer before  going through these processes.

With the images cut out I could then assemble them to make the iPad ‘book’.  To do this I first made space for the upper surface on my downward facing iPad by expanding the canvas upwards a little. 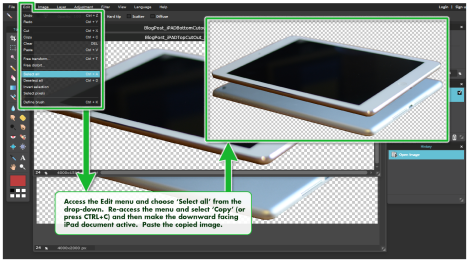 I then used the Free Transform tool to tweak the perspective slightly so that it looked more like it was sitting accurately a few centimetres above the face down iPad.  Free Distort can be good for this too.  To use Free Transform or Distort select the image information you wish to manipulate and then access the ‘Edit’ menu to trigger the desired tool.  Use the anchors on the box bounding your selection to make your changes.

For the spine iPad I removed two sections in the middle of the facing iPad (using the Lasso tool for selection followed by pressing Delete) and then selected and moved the three remaining sections roughly together.  Note that I kept the middle section as it has the iPad button and hole in the frame.  I also didn’t just Free Distort the iPad down to size as it would have thinned the white border of the iPad’s screen too much.

With the iPad narrowed (if somewhat broken) I then copied this into the same document as the previously assembled two images (as before this pastes to a new layer).  I then, using the already positioned top and bottom iPad images for size reference (I ended up moving them slightly further apart once I got going with the spine), blended the three pieces of the spine iPad together to create a whole (if decidedly narrow) iPad.

Blending the three parts into a convincing whole was the trickiest aspect of creating this image.  To do it I used a combination of (Lasso) selection, Free Transform rotation/scale/movement and Free Distort of the selection to manipulate the three parts into the correct edge and perspective alignment.  I then used the Clone Stamp tool (click this link for a simple YouTube tutorial on how Clone Stamp works) for blending the joins and overlaps seamlessly together.

Due to this particular image development being quite an involved process I’ve split this post in to two parts.  The second part, explaining how the screen-capture was made and placed on the top face of the iPad, the text placed on the spine and how other aspects of the image were finessed will follow soon in the second part of this post.

One response to “Creating the TEL Handbook Image – Part 1”

See our “COVID-19: Summary Page and Team Updates” blog post for both staff and student help.